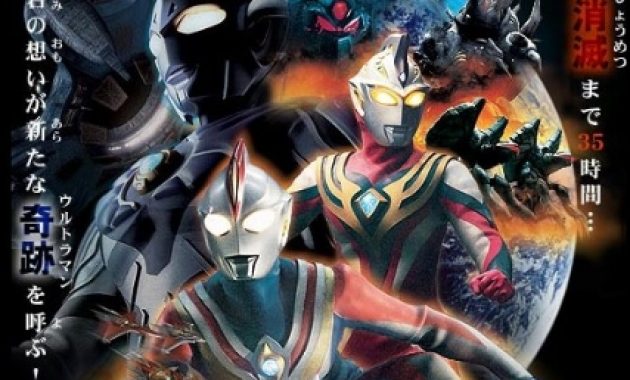 Sinopsis Ultraman Cosmos vs Ultraman Justice – The Final Battle : While EYES prepare to safely transport the world’s monsters to a far off planet where they will no longer be troubled by humans, an army of giant alien robots, called Gloker Pawns appear to stop the project. Cosmos arrives in time to temporarily stop the attack when Ultraman Justice enters the battle aiding the alien invaders. Cosmos is defeated by Justice and the aliens destroy the spacecraft that were to be used as transports for the monsters. It becomes apparent that these aliens don’t want Earth’s species to leave the planet.With Cosmos out of the way the invaders begin an onslaught against the Earth’s major cities. Every attack is witnessed by a mysterious woman in black who shows no emotion and no desire to interact with any of the victims. Without Cosmos the world is defenseless.It is soon revealed that the mysterious woman Julie is Justice in disguise who has been sent by a Universal peace-keeping organisation called the Universal Justice to oversee their plans. Justice appears at a meeting of top level EYES leaders to deliver a message from the organisation: In the near future life on Earth will become a threat to peace in the galaxy from the conclusion of the incident of Sandros (see 2nd movie). The aliens have come to destroy all life on Earth then restart it with new species that will be more acceptable to the other planets with their ultimate weapon, a massive space craft called Giga Endra. The destruction of Earth will begin in 35 hours and there will be no negotiations. As the Earth’s forces try to stop the advance of Giga Endra, nothing in their weapons are powerful enough to so much as scratch it. EYES at this time, tried to protect the people from the wrath of Gloker Pawns while putting all their efforts in getting a communication with Delaxion, one of the higher officials of the organisation in order to convince her to stop the attack.